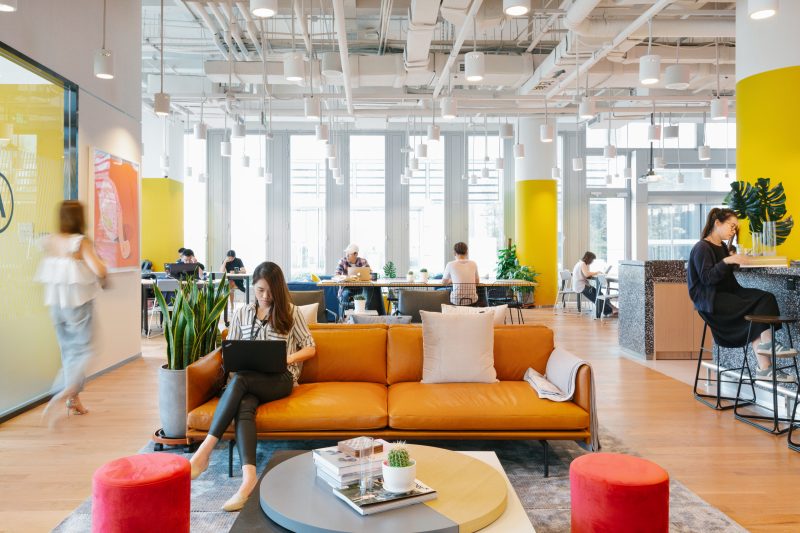 Just a few months ago, American co-working chain WeWork raised another US$500 million for its China operations. That brought the total funds raised for its business in the East Asian country to US$1 billion. The world noticed. Now, Softbank may even consider buying a majority stake in WeWork for around US$15 billion to US$20 billion.

WeWork seems on track to enter the league of American brands that have somehow “made it” in China, from Starbucks to Apple. Just like how Starbucks rode on the wave of a growing, urban coffee shop culture in Chinese cities, WeWork is doing the same with China’s entrepreneurship euphoria.

In a blog post WeWork’s CEO Adam Neumann wrote that his company will help bridge China and the world. Mainland firms wishing to go global and foreign companies interested in China can use WeWork as a launching pad.

“WeWork is as much a co-working space as Amazon is a bookstore”, Neumann once told Bloomberg. Its value proposition is not the mere real estate it provides, but an ecosystem of services and networks for all things entrepreneurial. Just like Starbucks doesn’t just sell coffee, but ambiance.

WeWork’s journey to the East

WeWork was six years old when it entered China in 2016 and had built a strong presence in the US and the UK, enticing tenants with free beer and nicely decorated offices. It came to China just a year after the Chinese government unveiled measures that encourage entrepreneurship, leading to more companies being founded. China saw 4.4 million firms set up in 2015, and around 5.5 million in 2016 (in Chinese).

This, accompanied with a shift towards the sharing economy, a tech boom, and the rise of a millennial workforce, according to a 2016 JLL report, started a co-working trend in China. A slew of new co-working space providers was founded between 2015 and 2016, like Naked Hub, Ucommune (previously UrWork), Mydream+, Weplus, Fountown, KrSpace (a sister company of KrASIA through its parent 36Kr), and Woo Space.

WeWork’s entry was evidence that something was brewing in China, and it was neither coffee nor beer. The landscape was competitive but nascent. Co-working spaces were busy building new locations, one after another. In the span of two years, WeWork managed to build up a member base of 20,000 people in China with almost 40 co-working spaces.

By 2018, more consolidation started to take place. WeWork acquired Naked Hub, absorbing its 10,000 members and an additional 24 locations in China. Meanwhile, Ucommune, WeWork’s biggest local rival bought Woo Space, an acquisition which brought its total number of locations to 160, globally, the majority of them in China.

Among the co-working companies in China WeWork could have acquired, Naked Hub seemed to have a culture most aligned with WeWork’s philosophy. Both paid close attention to designing a “living room” concept and allowing members to feel comfortable socialising over beverages and yoga. Its outlets give off an artsy vibe, often reflecting the respective city’s heritage; in its Shanghai Guangdong Lu offices Naked Hub features abacus-art and brick elevators a la Shikumen houses (a traditional style of Shanghainese architecture that started in the 1860s).

Naked Hub also sells a lifestyle around leisure and communication with a lot of effort going into communal spaces and hospitality-led services.

This wave of acquisitions is likely not the last we’ll see from WeWork and its competitors as they scale in China.

“In 2019, compared to 2017 and 2018, the pace of co-working will slow down in tier-1 cities like Beijing,” Sabrina Wei, head of North China research at Cushman & Wakefield, told KrASIA. Instead, she says, operators will boost efforts in tier-2 cities to gain market share, with further expected consolidations in 2019.

WeWork’s strategy in China – and elsewhere – seems to be founded in the concept of retail ubiquity.

Just like how coffee drinkers can find a Starbucks in most metropolitan cities, entrepreneurs can find a WeWork wherever they go. Starbucks sees China as one of its biggest markets, having opened more than 3,000 outlets with many more to go, said its China CEO Belinda Wong. Customers tend to put their money with the company that seems the most credible and commonplace; having more outlets with WeWork signboards can do just that for the firm. The other selling point is an aspirational lifestyle – from trendy decoration to free beer sessions, WeWork represents the type of work+play space that’s associated with famous Silicon Valley firms.

Entrepreneurs in China often see localisation as their advantage, implying that foreign, especially American, companies enter the country without the necessary cultural insights. And it’s true that big tech firms like Uber and eBay have struggled to persevere against local competitors.

One of Uber’s mistakes, for example, was to launch in the country with a Google Maps integration and credit card payments, two things that don’t really work as well in China as they do in the company’s home country. Uber eventually merged with Didi.

When it comes to co-working, do local players just have a better understanding of China-specific requirements for certain firms? In an interview with Forbes, Liu Cheng Cheng, the founder of KrSpace, said that WeWork’s free beer and ping-pong tables aren’t necessarily a good match with the work culture found in Chinese firms. These tend to prioritise a work ethic referred to as 9-9-6 – literally working 9 am to 9 pm six days a week. KrSpace goes the route of focusing on free legal and financial consultations for entrepreneurs instead.

Liu doesn’t believe WeWork’s culture might change China’s famous 9-9-6 rule. “As a joint office operator, our role is, essentially, to serve companies and members, rather than trying to change their needs and habits,” he told KrASIA.

While entrepreneurship is growing at an extraordinary rate in China, so are the surrounding entities that support them, from accounting software to co-working spaces.

According to a 2018 China Money Network report, Chinese co-working companies are increasingly looking at strategic expansion overseas. These physical spaces will continue to be marketed at Chinese entrepreneurs looking to take their companies to Southeast Asia.

Meanwhile, using tech, like smart sensors, to determine how busy one particular co-working location gets is another trend, explained WeWork’s managing director for Southeast Asia, Turochas Fuad in an interview.

WeWork is also diving into other verticals and industries, from grade school (WeGrow) to co-living (WeLive) to a startup accelerator (WeWork Labs) – further encroaching on territories that touch all aspects of life, beyond the professional.

Like Starbucks, WeWork might make it in China by selling aspiration on top of its co-working space fundamentals, at every corner. Ucommune essentially has a similar appeal in terms of how its spaces are designed and it has even more locations in China at the moment, but with Softbank’s backing, WeWork will be on an expansion course. The market will stay dynamic as the two leading co-working chains work out its localized offerings or a globally connected lifestyle that appeal most to entrepreneurs working in China.

WeWork declined to be interviewed for this article.