Indonesia gets thirsty for some on-demand kopi

In this era of instant gratification, you can book a taxi, buy movie tickets, order food, hire cleaning services, get your laundry washed, and do many more things — all through few touches on a smartphone. The keyword here is ‘on-demand’, which means “you get something delivered when you ask for it.”

And quite a number of startups making good use of the concept have grown to billion-dollar businesses. The products and services they offer are varied, so why not coffee?

It’s definitely not an unexplored idea. Luckin Coffee in China has become the poster child of on-demand coffee in Asia, challenging big American chain Starbucks in the Middle Kingdom with a deer-head logo and signature blue cups. Launched in 2017, the Chinese unicorn is now fundraising to double its valuation to US$2 billion, according to Reuters.

And inspired by Luckin, there are also coffee chain startups in Indonesia working on the same idea.

Still a newcomer to China’s coffee market, Luckin is on an aggressive marketing spree. Its goal, as announced in August 2018, was to open 2,000 stores by the end of this year. Yet, these stores are not exactly what you can expect from a coffee brand.

First of all, you can’t order or pay for your coffee with a waiter or cashier at a Luckin Coffee outlet. The only way to order is via Luckin’s proprietary smartphone app. You can then get it delivered to where you are, or pick it up at a particular outlet. This takes long queues and waiting out of the equation. You can order on your way to work, stop at the coffee house to pick it up and continue on without missing a beat.

Secondly, Luckin Coffee is relatively cheaper than Starbucks. Its CEO Qian Zhiya said in an interview in July 2018 that she admires how “inclusive” Xiaomi or Netease’s Yan Xuan brands are as they offer “good quality items that are not expensive”.

She added that the company does not currently have a timetable for making profits, because the most important thing for now is its user numbers and customers’ repurchase rate. “I care about whether users approve of us, and whether we can dominate users’ mindshare — these are the things we care about the most,” she said then.

Thirdly, the company understands how consumers respond to marketing, using celebrities to endorse its coffee, creating a lifestyle instead of a beverage. For endorsements, it got top stars like Chinese actress Tang Wei and actor Zhang Zhen to support its brand.

As one entrepreneur Natasha Fang put it in an article, the secret to Luckin Coffee’s success in China lies in its “overall marketing strategy”: incorporating offline resources – ads on office buildings and suburbs – and online ones through discounts for app download referrals and multiple drink orders, spurring users to post on social media networks asking friends to come onboard. For the average consumer, a buy-2-get-one-free offer is quite the bargain.

Luckin Coffee has the money to spend on discounts and marketing, at least for now. The company raised US$200 million in a Series A round announced June 2018.

In China, a traditionally tea-drinking country, coffee consumption is considered to be luxury and not habitual for the local citizen. Even in tier one cities like Beijing or Shanghai, an average consumer drinks only 20 cups of coffee per year as compared to 300 cups per person in the U.S. According to some industry insiders we talked with, Luckin will have to keep raising more funding to maintain its low price edge and attract more consumers.

When it comes to fighting with Starbucks, a well-known brand that has partnered with Alibaba’s food delivery service Ele.me, Luckin might appear to have fewer resources, from delivery fleet to brand awareness. However, it is still winning on the price front, especially as delivery fees can be hefty for its rival, on top of the premium prices tagged to the beverages.

While Luckin Coffee might be getting a lot of things right, its shops are often designed more for takeaways than for socialising. People who are just looking to get their fix may find Luckin Coffee a good choice, but those interested in having a chat over coffee may prefer Starbucks for its ambience and good seating options. The former gives off a vibe of ‘get in, get out’. A colleague working in Beijing described Luckin Coffee outlets as ‘neat’ and ‘organised’; “the shop is small, and we can’t see the dirt and grime of coffee. Compared to a traditional coffee house, it’s more like a kitchen made for pickups.”

Of all markets, Indonesia happens to see an uptick in startups like Luckin Coffee. Two such companies, Fore Coffee and Kopi Kenangan, have already been funded by venture capital to achieve greater growth. Smaller brands like Tuku Coffee were pioneers in using delivery to reach more consumers; according to the Jakarta Post, “some people are willing to wait for hours for their iced coffee to be delivered”.

This is by no means a coincidence — Indonesia has a strong coffee consumption culture. Globally, it’s the third largest coffee exporter. Domestically, consumption has “nearly doubled” in the last decade, according to Reuters in June.

Fore Coffee started off as Otten Coffee in 2012, a coffee showroom in Medan, North Sumatra. It gradually moved into e-commerce in 2015. The founders then opened a second showroom in Jakarta in June 2018, after which the firm began a discussion with its investor East Ventures about going into the on-demand coffee business. Not long after early August, the company served its first cup.

Fore Coffee was started by Robin Boe, who said in an interview with KrASIA that as a tech company, it “made possible what a normal coffee shop wouldn’t be able to do”. Its strength is in the combination of online and offline, he said, as the team leverages Otten Coffee’s expertise and network, which helped them with tasks like hiring for operations, quality assurance, procurement of machinery and more.

The startup also had to acquire customers, which Boe said had “grown organically” from word of mouth. However, it has also started a number of promotions and partnerships with other companies to garner more fans.

He said that increasingly, more people are buying food via delivery instead of dine-in or takeaway, citing a study by Indonesian food delivery platform Go-Food. 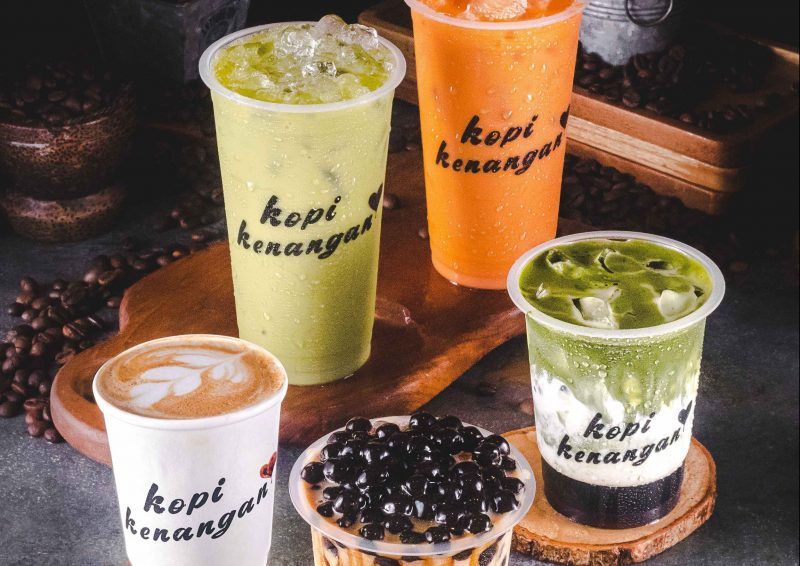 Another newcomer in the on-demand coffee space is Kopi Kenangan, a startup that has recently secured funding of US$8 million from Alpha JWC Ventures. It has high hopes of becoming as big as Starbucks Indonesia in three years, said Edward Tirtanata, the co-founder and CEO of Kopi Kenangan.

Tirtanata, like Boe, had prior experience in the food and beverage industry. He started a premium teahouse in Indonesia called Lewis & Carroll, and then launched a range of coffee menus in the teahouse. Realising that it was selling like hotcakes, he decided to open a coffee chain as well.

He told KrASIA that the market loved it, and that the coffee chain sold 700 cups on its first day. “And then we experimented in a lot of places, and we found out that our coffee concept can open in almost any commercial places: malls, hospital, office, garden, shop house, lower ground, basement, food court.” That’s when he and his team realised that the business is “highly scalable”, which led to the creation of Kopi Kenangan. His vision is that “anyone in Greater Jakarta can just open an app to search” for its coffee or get it delivered.

However, delivery-only isn’t the answer, said Tirtanata. “Because we believe if your product is good, then customers will look for you, and they will come to you as long as you are within a reasonable distance”, he explained.

“Handling logistics in Indonesia would be a nightmare”, he said, adding that it would increase its “cost of goods sold (COGS)” and invite customer dissatisfaction. “We would rather have a strong brand first then consider a logistic team later,” he said. For now, Kopi Kenangan’s offerings are available on Go-Food and GrabFood marketplaces.

One of the biggest problems faced by the startup revolves around human resources. With its current team, it can only open seven stores a month, he said. Its competitor Starbucks Indonesia has 322 stores in Indonesia as of April 2018, and has plans to establish 60 new outlets every year for the next three, according to Bloomberg. “Now we’re focusing on getting the right talent so we can triple our current rate of expansion,” he told us.

Yet it seems what gets Tirtanata up in the morning is not quite the smell of freshly brewed coffee but the understanding of how data will differentiate the winners from the losers in business. “I am all about data, data, and data,” he said.

After all, businesses that underestimate the importance of capturing customer data in the physical world will soon be left behind, and the future belongs to the businesses that blend online, offline, logistics and data across a single value chain, he concluded.