While growing user numbers was something to cheer about for a startup looking to scale its business, it could, in turn, become a burden if things go astray.

After few rounds of stories on how Ofo, one of the major Chinese bike-sharing players, was plagued by financial difficulties in addition to some vivid accounts of users having issues with refunding their deposit, Ofo users started to request a deposit refund via their apps.

And for Ofo users in Beijing, many chose to line up in front of Ofo’s headquarters seeking for an on-site refund, but to no avail. They returned empty handed and were told that a refund will only be available within 15 days upon request. The company says that they will compile both user groups – those who register online and those who register in person – and run the refund process in chronological order. 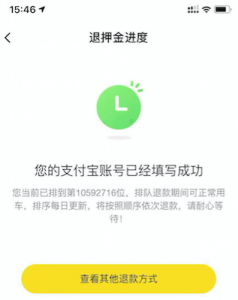 This is probably the largest problem Ofo is beset with recently, after countless media reports of its massive global pull out from markets such as Germany, Australia, Israel, and India over the past months. Its last big saga involved withdrawing from Japan – one of its key markets, signalling clear worsening conditions.

Ofo has previously rejected acquisition proposals from the likes of Didi Chuxing, Ant Financial, Alibaba etc. Ofo’s founder DAI Wei insisted on staying to fight to keep the company afloat, despite the fact that even its close rival Mobike got bought over by the HK-listed Meituan Dianping.