Practical Guide for A Manager Part 3: Highlight The Key Points

This article was originally published in the WeChat public account iquanwai. The writer Sun Quanquan is a former consulting director at Mercer and later founded and became the CEO of Quanwai (圈外), which focuses on providing mobile online learning products for working professionals. Kr-Asia.com has been authorized to publish this article.

This article introduces strategies that are effective yet often neglected by managers.

The management team and employees sometimes have different visions about their current job. That is caused by the information gap.

To bridge that gap, managers need to highlight:

1.The responsibilities and goals of the employee’s current position.

2.The current focus of your company.

This is the last part of a 3-Part Series.

If you ask anyone in the workplace what problems they want to solve now, 80% of them will tell you this: how to co-exist with their boss.

Both employer and workers, even though their ultimate goal is the same, differ in many aspects and perspectives. This conflict exists naturally.

The reason for this is simple. What is being seen and processed by the manager is different from the workers.

Being in a managerial role, you are exposed to strategies, directions, industries, and companies. You have the opportunity to discuss important decisions with the CEO (or maybe you are the CEO).

This position is unlike the workers, who see daily only their peers from the same department, who have nearly the same seniority level, do not have the opportunity to participate in big decision making, and therefore do not get to see the full picture.

What problems can arise when having this type of information gap? Very simple, let’s take a look at this picture: 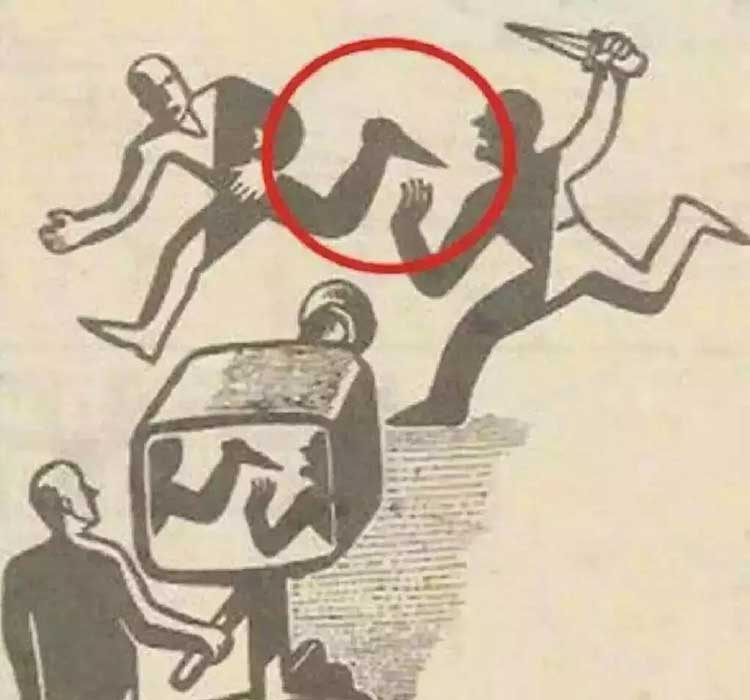 If all you see is the image within the frame, you will see that the person on the left wants to hurt the one on the right. But what is captured in the frame is only a part of the picture, the image only transpired the area that is circled. But if you get to see the full view, only will you notice that the truth is completely the opposite.

This is what causes the natural conflicts between management and workers. Both are receiving divergent messages making them see pictures that are entirely different, and yet they believe what they see is correct.

Therefore, the manager will feel that his workers cannot understand him, while on the other hand, the worker feels their leader is stupid. It is no surprise that when reading articles on social media, many managers blame young employees for not being realistic, while the employees criticize their bosses for being idiots.

This phenomenon is caused by nothing more than the information gap between managers and workers.

The manager always feels: this is just an easy matter, why are you the only one who doesn’t understand what I’m saying? There are so many problems out there – why are you not seeing them?

Why, on the other hand, couldn’t the manager recognize this information gap?

The book Made to Stick: Why Some Ideas Survive and Others Die touches on the concept of “the curse of knowledge”. That is, when a person knows something, he cannot imagine not knowing it.

Take a simple example. You put on headphones and listen to the “Happy Birthday” song. While listening, you tap on the table rhythmically as your friend tries to guess the song. You soon realize that, even with an easily recognizable song as this, your friend will have trouble guessing it.

You were surprised. You felt you tapped the song very clearly to your friend, so why can’t he identify the song? In reality, there is an information gap between you and your friend. You hear the song and he does not; therefore, you cannot imagine the situation he is in.

In the same vein, management knew about all the information, but they cannot imagine the staff’s lack of the same knowledge.

Therefore, since we already know that there is an information gap between management and staff and that it is hard for a manager to be aware of this gap, causing both parties to have trouble communicating and collaborating, we know what to do next.

Managers must constantly highlight the key points to the staff and prevent them from running off-track. Even if you feel that the staff should already know it, you must still keep on emphasizing the main point because they very likely do not know it.

1) The goal of the employee’s present position

Imagine asking a staff member, “What value do you think you contribute to this organization in your current position?” The majority of people would be unable to answer this question. But this is not the employee’s fault, it’s the manager’s fault. If this point is not clear to the staff, conflicts will arise between them and management.

Let say for example there is a company, the CEO felt the HR department should be used as an auxiliary service department to respond to the business department’s recruitment request, training, and so on.

But the head of HR has a different opinion: his department should provide supervision and guidance, upholding the company culture and values. Therefore, for everything they do, both the CEO and HR will have rather contrasting opinions.

But the CEO and HR department head have never communicated this particular goal, because they are all relied on their past working experience to infer that their expectations in the organization were universally understood.

2) The current focus of the company

The job focus of an organization and its team are constantly changing depending on the development progress of the organization. But the staff are focusing on their jobs, rarely feeling the changes. Therefore, the management team must regularly inform them.

For instance, I was talking to a salesman who subscribed to our online learning product. He mentioned that he had opened up a lot of new accounts but found that his boss was not appreciative of his efforts, which upset him.

Only by consistently highlighting the key points can managers help to reduce information gaps between the management team and the workers.

Of course, highlighting the key point can be done in many ways, either through morning gatherings, ongoing meetings, or performance management tools.

In my own company, we will have a morning meeting every Monday. First on the agendas is letting each other speak about the work they are going to do the coming week.

This method enables the staff to learn about making weekly plans and not being stressed. Moreover, this process allows me to quickly pinpoint areas of work that are inconsistent with the company goal, correct these discrepancies, and ensure the resources of the organization are spent efficiently.

Let me conclude by summing up the three points we discussed in the whole 3-part series.

As a manager, the most important yet most easily neglected areas are:

1) Finding true meaning: Helping the staff find the real meaning in his work, making them able to connect work with their own life

2) Train them to fish: Do not emphasize short-term efficiency; instead, consider matters from the widest perspective and emphasize group efficiency, spending time training those who can be trained.

3) Highlight the key point: There are huge conflicts in communication between the management team and the staff, so it is essential for the manager to keep highlighting the key point, for it may not initially be naturally understood. Only by doing so can you ensure that resources are used appropriately.