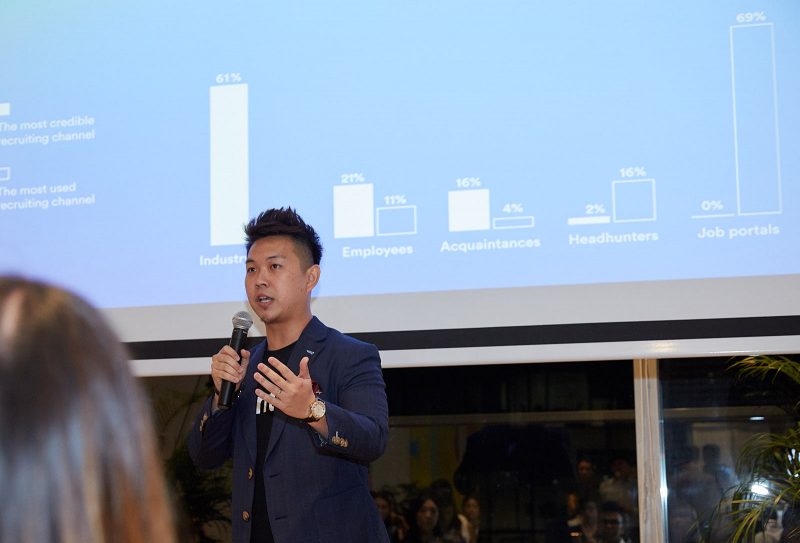 For many companies, social referrals have always played an integral role in recruitment efforts. On one hand, employees would recommend job openings to their friends and family. On the other, people who see certain job listings online or elsewhere might share them with their connections.

South Korea-based mobile and web job portal Wanted uses this strategy to its advantage with its social referral-centric platform: it rewards referees and the candidate with cash for every referral that results in a successful hire that stays employed for more than three months.

In Singapore, Wanted pays referees S$1,000 (around US$732) and the successful hire S$700 (US$512) once the new hire crosses the three-month mark. The amount varies according to the seniority of the job position.

According to Edric Lin (pictured above), the Country Director for Singapore at Wanted, the company launched its services in Singapore in April 2018, and in just a few months, Singapore has overtaken the rest of the region Wanted operates out of as the biggest overseas market in terms of the number of job applications received. To date, in Singapore, it has received 3,500 job applications and garnered a member base of 10,000 users.

In Singapore, Wanted has hired three persons so far, but operations are also being supported by over 70 team members in its other markets: South Korea, Japan, Hong Kong and Taiwan.

Globally, the three-year-old company is working with more than 3,000 businesses, out of which 40 are based in Singapore, said Lin.

Wanted works primarily with tech companies or established firms looking to hire tech talent. Tech companies are always expanding, and traditional firms are ramping up efforts to digitise their assets as well, both resulting in hiring sprees, he said.

Additionally, focusing on technology was the strategy Wanted took in South Korea, working with businesses like chat app corporation Kakao and Nexon.

It charges companies a seven per cent cut of the candidate’s annual salary; if the candidate does not last the first three months, Wanted will refund 80 per cent of the commission fee to the company, Lin shared.

Traditional recruitment agencies take upwards of 10 per cent of the candidate’s annual remuneration, according to a report published by Singapore-based HR tech company Payboy.

In Singapore, Wanted’s competitors include LinkedIn, Indeed, JobsDB, Jobstreet, and traditional recruitment agencies, but Lin believes that “there is a market for everyone”.

The importance of social referrals

Executives familiar with hiring tech talent we spoke to said that social referrals are going to stay, especially in a small market like Singapore.

Social referrals made by employees help companies improve the quality and speed of hiring candidates, said Dorothy Yiu, COO of Singapore-based employee tech platform EngageRocket. When people make referrals, they are often putting their name and reputation on the line by endorsing a person they know, she added.

Preeti Prabhu, the lead programme manager at Singapore- and US-based real-time multimedia analytics firm Graymatics said that hiring tech talent is more than just looking for college names or a graduate with a Computer Science (CS) degree. In the past, Graymatics has seen candidates from non-CS streams, who come from the biomedical or chemical engineering sector, perform better than their peers with CS qualifications, who might look better on paper, she said.

Besides, Singapore has a tightly-knit tech community, in that “everyone knows everyone else in the field so candidates with referrals tend to fit in very well because expectations get well-matched in the process of social referrals”, said Prabhu.

Yiu agreed, telling KrASIA that those referred to the firm through such means would often get a first-hand introduction to the company’s business and culture, which makes employee on-boarding easier, she said.

“People apply to our company because someone, ex-employee or someone who knew an ex-employee, referred them to us. Sometimes, it’s a customer who tells them what we do,” added Prabhu.

Wanted expands on that concept by bringing social referrals to people outside of the company’s payroll, increasing the potential reach and the viral component of the job listing.

By adding a reward factor, it incentivises users to share relevant job listings with their social networks, especially with friends they think will fare well and get the gig.

One might imagine that people would refer all their friends to all the job opportunities on Wanted, but it’s not that simple. Non-employee referees might not be putting their name on the line the same way an employee would should things go awry, but they still risk ruining a friendship with the candidate if the workplace turns out to be hostile or have bad employee policies.

As part of its market outreach efforts, Wanted also organises carnival-like job fairs where job seekers can find out more about the culture at various firms, enjoy cotton candy and popcorn, and even have their fortunes read by palm and tarot card readers.

Going forward, Lin sees Wanted’s Singapore office becoming a hub for what it’s doing in Southeast Asia, though did not specify where the company will focus on next.