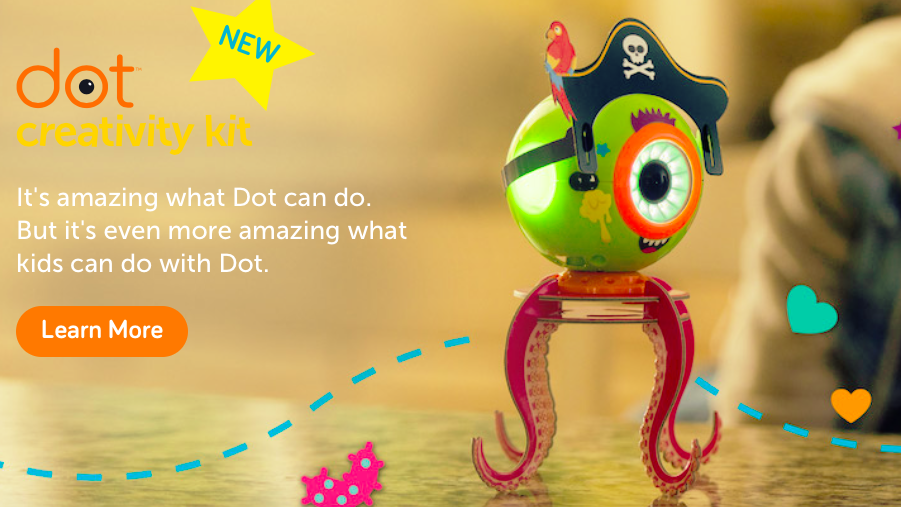 The idea of STEAM, abbreviation for Science, Technology, Engineering, Art and Math, originated in the U.S. The term is typically used when addressing educational policy and curriculums. Parents and teachers who adapt STEAM education value offline activities and children’s adaptive skills.

Wonder Workshop, an education and robotics startup based in Silicon Valley, raised $41 million in a Series C funding round led by Tencent and TAL Education Group. SoftBank Korea, VTRON and MindWorks VC also joined the round. The company plans to use the money in product innovation, marketing and hardware iteration.

Until now, Wonder Workshop has developed the market outside the U.S. including Singapore, China, Korea, Germany, the UK and some other countries in the Northern Europe.

Founded in 2012, the startup has two CleverBots — Dash and Dot both for kids to learn to code through its 5 apps dedicated to children of different age.When children give an instruction, the bot can respond to it and move around.

Compared to other startups in the domain, Wonder Workshop has a relatively mature industrial chain. Potential challenges on the hardware startup lie in its product development and sales channel. According to Zhiwei Yang, Wonder Workshop’s Asia-Pacific principle, the company’s product development is similar to LEGO. Designed for Children, the company expects the bot is easy to use.

In terms of its sales channels to business and to customer, Wonder Workshop has planned for both. Currently its customers are educational institutions and state schools including 25,000 primary schools, kindergartens and early educational institutions, among whom 17,000 are in the U.S. counting for 20 percent of the American market share.

In China, users can buy the bot and its accessories on TMALL, JD and Amazon. Institutions including ROBOROBO and MOBBY STEM CENTER collaborate with Wonder Workshop to teach children to code.

The STEAM education is relatively flexible compared to the traditional education. But challenges arise as flexibility means difficulties in standardization. There are then two problems for the company’s future development: vague evaluation mechanism and lack in appropriate teachers.

To address the potential issue, align with CSTA standards, Wonder Workshop has completed a K5 curriculum including its 72-hour challenge cards and a handbook for teachers. The bot maker has also teamed up with East China Normal University to train appropriate teachers.

The STEAM education in China is still in its early age and the market is less concentrated. Other than Wonder Workshop, electronic building block maker Makebolck is another potential leading company. Competition in the market is expected to aggravate in the future.

STEAM education in China is largely affected by the existing “teaching to the test” curriculum. It’s vital for the company to occupy the sales channel.

On the other hand, teaching policies in China give more and more attention to the education of coding. That makes the industry a potential promising field.