Inside food delivery in China, and its implications for the SEA market 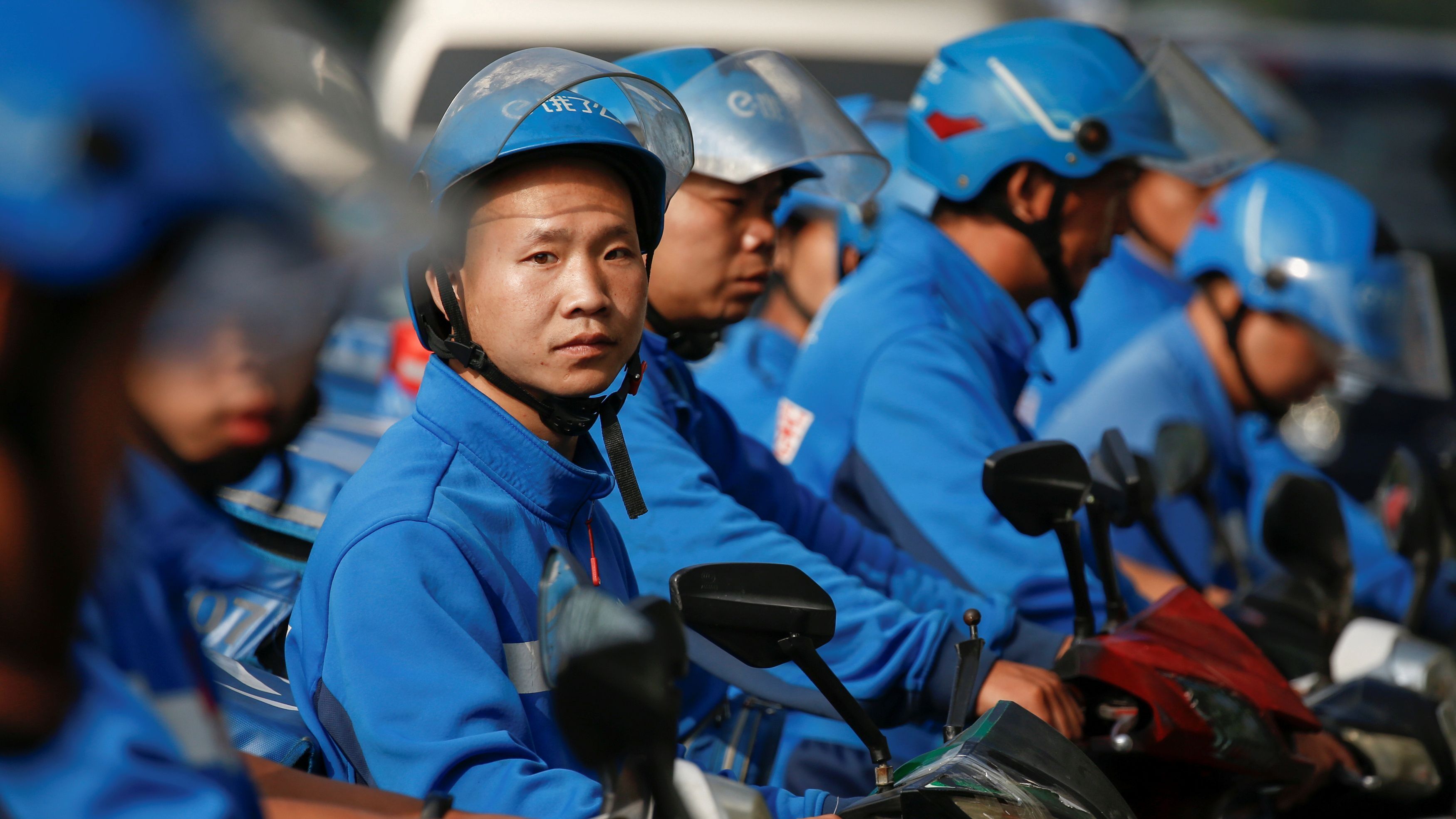 Hundreds of millions of venture capital dollars are currently at work to transform food consumption habits in China. Two companies are leading the innovators in this space: Ele.me, which is part of Alibaba, and Meituan, which recently had its public debut.

This development is mirrored in Southeast Asia, especially in Indonesia, where rival platforms Go-Jek and Grab are getting into food delivery in a big way. While there are similarities, there are also key differences in these markets. For one, online food delivery in China didn’t evolve alongside ride-hailing as it has in Indonesia.

Here’s a snapshot of where the Chinese food delivery market is now, and where it came from, based on KrASIA’s conversation with two industry insiders, one in China and one in Southeast Asia. The sources asked not to be identified because they’re not authorised to speak on behalf of their employers.

Ele.me started out over 10 years ago as a startup that delivered food to students in Shanghai. Meituan hit the scene a few years later, starting out as a group buying platform. While Meituan also got into food delivery the sector went through a major growth phase in 2015-2016.

One reason why Ele.me agreed to merge with Alibaba was the fierce competition coming from Meituan. The younger company moved fast. One of Meituan’s advantages was that it covered many local services verticals with its groupon-like voucher business and hence already knew a lot about its customers. By 2017, Meituan was preparing for its IPO and it started to reduce subsidies to get its financials in order, said our source, which prompted Ele.me.to go all-in to claim market share.

Through the partnership with Alibaba and its shopping apps TMall and Taobao, Ele.me hopes to gain a deeper understanding of its users and their behaviors beyond its own platform. Ele.me has some catching up to do in terms of the depth of user data, according to our source.

Meituan’s market entry was brilliant and effective, KrASIA was told. Ele.me started in top tier cities first, while Meituan first targeted low tier cities for their food deliveries branch. In big cities the supply and demand situation tends to be quite tough. Too many restaurants compete with each other and end up shutting down.

The restaurant business has a short life cycle. Typically, within six months to one year restaurants die, especially in China, the source explains. It’s a low entry barrier business but it’s hard to survive, so that every few months, you have to bring in new restaurants, especially in big cities. What this means is that it’s tough to get to a monopoly situation in big cities and you constantly have to fight to provide good “supply” – that is, an accurate, broad, and up to date selection of restaurants and caterers.

Meituan started in low tier cities where there was low competition. There, restaurants were happy to be on the platform. Some agreed to sign exclusive contracts in exchange for better commissions or more visibility on the platform. “Those cities became the major profit generator for Meituan and they “used this to subsidise in big cities.”

Meituan has about 63% market share, while Ele.me is at 35%, according to a report published by Beijing-based 3rd-party market researcher DCCI. In May 2018, Meituan announced that it hit 20m daily orders.

Why Didi isn’t a major threat

In Indonesia, food delivery was an important arena for the local ride-hailing company, Go-Jek, from the start. Food-delivery-only companies, like Foodpanda, struggled to find scale.

We’ve covered some of the details of how Go-Food and Grab Food evolved here.

Ride-hailing and food delivery is a good match in Indonesia, because one popular mode of transportation are motorcycle taxis. The big fleets of motorcycle drivers can switch between shuttling passengers and picking up food, which creates efficiency in the system, says our source.

In China, it’s different. Both Meituan and Ele.me started their food delivery business without a ride-hailing component.

Meanwhile the local ride-hailing firm Didi did not see food delivery to be a key pillar in its development. It also did not already have a fleet of motorcyclists ready to take food delivery orders, because motorcycle taxis for people transport aren’t allowed on ride-hailing networks in China.

It did launch food delivery in a few cities, but from the perspective of the leaders, Ele.me and Meituan, Didi is not a major rival.

There are too many differences in what matters for food delivery versus people transport, explains our source. “I think Didi thought this is an easy business because they already know how to do match-making (connecting an order with a delivery person), but I don’t think so.”

Ride hailing has peak hours, but they are not as concentrated as in food delivery, where it’s just lunch and dinner.

To operate food delivery logistics at scale, and profitably, many more considerations are necessary, for example plan so that delivery riders don’t take just one order to one person, but pick up many orders and deliver them along a route that makes sense.

“Didi doesn’t seem to be very serious about food delivery to be honest.” Our source thinks it was an attempt to send a signal to Meituan because Meituan had entered the ride-hailing business, a push which didn’t last long.

Still not a highly profitable business

Despite being in the food delivery space for nearly a decade, in the case of Ele.me, profitability is still elusive. Meituan and Ele.me are still not making money on every order. Meituan Waimai head Wang Pu said last year that the food delivery business is making a profit in some cities, but overall is still loss making. He expects overall profitability to set in after two more years.

Ele.me’s revenue stems from restaurant commissions, the delivery fee from users, and restaurants who advertise on the platform to get more exposure. It still subsidises parts of the business through promotions and the delivery cost.

Unlike in ride-hailing, where customers accept price hikes during peak hours to some extent, it’s difficult to charge higher prices for food deliveries, because people are very sensitive to this, we were told.

Profitability is difficult to achieve because basket sizes for food tend to be quite low in China — which means one individual order sometimes doesn’t can’t cover all the costs of getting it delivered. For e-commerce orders, which tend to be of higher value, the equation is different.

Ele.me, for instance, has its own fleet of full time employees to handle deliveries This makes for a stable service quality, but it’s also expensive. To supplement during peak hours, Ele.me works with agents. These agents bring in delivery personnel ad-hoc, when needed, and handle their on-boarding and payment.

A crowd-sourced model were individuals sign up with Ele.me directly also exists, but it’s not the core of the delivery fleet. To provide quick and stable service quality it’s necessary to have a fleet on contract, our source says. “If it rains, those people who have a contract have to work. The crowdsourcing ones might not want to pick up the orders.”

Ele.me also works with third-party professional delivery services for packaged food and parcels, so there are really many different ways the firm handles its logistics, depending on the size of the order and specific needs.

Moving forward, there’s still a lot Ele.me and Meituan can do, in terms of optimizing the system, according to the source, especially at Ele.me which is lagging behind because it did not have as much data to learn from.

But it has run several experiments to further optimize logistics, and lower prices in all parts of the business. For example, it operates its own kitchens and restaurants. One example is an experiment with a breakfast option — mornings are typically quiet phases on food delivery apps.

Noting that there are few breakfast options around office towers, Ele.me decided to offer a special breakfast menu through its app, which customers could reserve, say where they work, and then pick it up from an Ele.me guy as they enter the building.

Another innovation is a platform that serves restaurants with all the ingredients they need — an avenue where Ele.me can benefit from synergies with Alibaba. “China has a thousand little suppliers, it’s hard to coordinate with everyone,” our source explains, which is why a centralized platform could make life easier for restaurants.

Overall, food delivery is changing how restaurants run their business in China. Many don’t even have a dining area anymore.

Giant international chains like Starbucks are having to adjust to the delivery phenomenon too, although it did so reluctantly in China. Ele.me was able to sign on the coffee chain in an exclusive agreement, after many concessions.

They didn’t want to be online to reduce the quality of the experience, and the way Ele.me was able to address that was by having a delivery fleet that only serves Starbucks, uses different packaging, and has special training. Starbucks itself developed a new product line that’s specific to delivery. It’s a trial our source thinks could be replicated with other big F&B brands like McD and Dominos across China and elsewhere in the future.

Meanwhile, Meituan has invested or fully acquired some F&B SaaS startups, including Passiontec and Troy Info Tech, both looking to digitize the traditional restaurant industry in terms of ordering and cashiering, improving restaurant supply chain management and assisting daily operations with data and insights.